Agrotec recognizes weeds locally with CV and CNN and eliminates them using a manipulator with a high-precision microwave (MW) gun.
The agricultural robot navigates autonomously using GNSS RTK (accuracy 20mm).
In case of high weeds density, the speed of the robot can be reduced automatically, similarly, when a clean, non-clogged area is detected, the speed of the robot can be automatically increased to 1.5 m/s.


We have conducted hundreds of experiments and now confident that we can make an economically feasible method of microwave weed removal and will soon bring it to the market. We continue research into the use of an ultrasonic H2O2 fog generator to eliminate diseases, fungi, viruses - to prevent plant diseases and increase yields.

In simple terms, we have a real opportunity to get an economically viable and efficient weed control system without the use of chemicals based on microwave.
This will change the game in agriculture, improve the quality of products, neutralize the negative impact on the environment, automate the process of weed control and make it fully digital, smart, modern and safe. 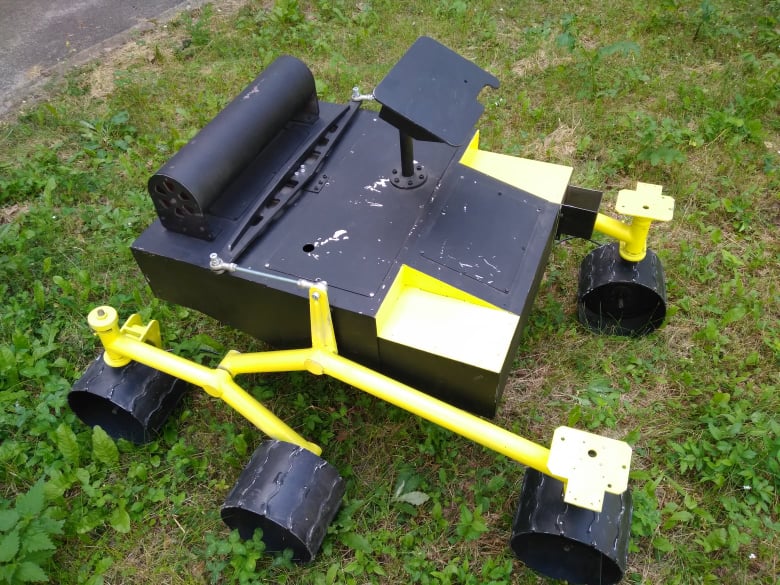 
Microwave heating is not influenced by wind direction and speed, rain, etc, therefore prolonging the application periods compared to traditional methods of herbicides spraying, also there is no resistance to microwave of various weed species.


Weed control: no-till and chemical free farming is a modern, integrated farming system that requires special equipment and technology. Our Agrocomplex quickly identifies weeds at an early stage and eradicates them using microwave treatment.
Intelligent Vision System: combination of multispectral images and can be analyzed using AI algorithms to detect anomalies at an early stage in pathogen development.
Autonomous movement: our robot senses its environment using GNSS RTK (GPS), stereo camera, IMU and wheel odometry and special algorithms developed at ROS.
Agrobot do the difficult tasks that are harmful to the health of the workers, so it offer the safety for the workers - by protecting the human workers from the harmful effects of handling the chemicals by the hand and through the system of high spraying.

- UP TO 50% LESS EXPENSIVE THAN STANDARD TREATMENTS
- REDUCE UP TO 99% OF THE USE OF HARBICIDES
- IMPROVED YIELD: NO HERBICIDE LEFT ON THE CROPS
- CONSERVES THE ORGANIC LIFE OF THE SOIL, WITH LIMITED SOIL COMPACTION
- FULLY AUTONOMOUS SAFE WORK DAY AND NIGHT
- AUTOMATIC ANALYSYS OF THE TOTAL LEAF AREAS OF THE PLANTS IN INDIVIDUAL PLOTS, PHENOTYPE, SOIL PROBE ETC
- CHEMICAL-FREE, NO-TILL AGRICULTURE

Technical Description of the Agrotec AMR

The business development is based on generating both economic profit and competitive gap:
In numbers:
- up to 50% less expensive than standard treatment;
- up to 99% reducing of chemical use;
- up to 40% potential of yield increasing (the effect of preservation);
- up to 24/7 autonomous safe work day and night;
- up to 100% eco-friendly (no-till, chemical free)
- up to 100% safe food (chemical free);
- up to 95% accuracy in weeds and diseases recognition and control.
The commercialization strategy:

Pay per Use (PpU) or RaaS model: In this case, the Customer is charged for a specific usage of one or more modules benefiting from, flexibility, choice of services, different rates of pay. A yearly subscription (monthly/trimestral paid) including managing and controlling SW, training activity and ordinary maintenance and a certain number of remote support interventions is included.

Pay as you Go (PayG): In this case the Customer pays a one-time cost for the system and to get access to related services. For the first year, the cost includes the remote technical support for a certain number of hours, one training session on-site. After the first year, a yearly subscription (monthly/trimestral paid) is foreseen and, like the PpU solution, additional services can be included.

Sale of a license (production under license): It's more about scaling and expanding into the market, but the license will also be sold and generate income from the sale, as well as in the form of royalties.

Let’s consider the possibility of using the Agrotec robot to destroy weeds in a field sown with corn with an area of 5 hectares. According to the popular and effective technique of Dieter Spaar on 1 square meter, we will take an average row spacing of 0.4 m, since the treatment against weeds will be carried out in places where there are no crops, then we will allocate two strips of 1 m by 0.05 m for the usable area sown with corn. Thus, for processing with high-density microwave energy, two strips with a width of 0.4 m and a length of 1 m remain.

The robot is equipped with at least 4 microwave installations of 3 kW each (work in half a cycle). The robot is provided with a screen that ensures the safe operation of the robot even when living beings (people, animals) are directly next to it at a distance of less than 1 m in accordance with Directive 89/391 / EEC On the introduction of measures to improve the safety and health of workers at work and the directive European Parliament and Council 2013/35 / eu of 26 June 2013

At a speed of 1 m/s, the robot manages to make 8 applications of microwave energy to the weeds identified by computer vision.
A special algorithm based on neural networks recognizes the type of weed, its weight, volume, approximate moisture content (H2O) in the plant and its height, based on these data, a decision is made on the positioning of the applicator.

The application of a microwave for 0.5 seconds with a power of 3000 W with a high energy density leads to the heating of the cellular and intercellular fluids of the plant to the boiling point, which leads to the explosion of cell membranes and the destruction of the plant.
High energy density is achieved at a specific focal length using a waveguide and horn antenna specially designed for the 2.45 GHz frequency.

The cost of one charge is approximately 15 euro (100 kW at the average cost of electricity in the EU). Accordingly, the cost of processing and destroying weeds on a 5 hectares field is 15 euros, excluding capital investment and depreciation of the robot. Which is about 10 times lower than the price of traditional herbicide treatments.

Service life of the magnetron, not less than 2000 hours. That corresponds to 1600 hectares, treated in a maximum mode of 0.5 seconds of magnetron activity for each 1 second of robot operation.
The robot uses a mass-produced magnetron, the cost of which is low, so the magnetron can be considered a consumable item that must be replaced as part of routine maintenance every 16,000 km (1,600 ha).
In a modular, extended configuration, in which the robot can also be used for precision fertilization, field survey using video and photo shooting, taking soil samples, treating plants for diseases by spraying hydrogen peroxide in the form of dry steam.

Description of the microwave installation:
- Magnetron type: 2M285-04ARCM LG 3kW;
- Magnetron weight 3 kg;
The magnetron is attached to the movable part of the 3D delta manipulator with, which makes it possible to increase the exposure time without stopping the robot, as well as precisely apply the focused energy. Energy is applied to the most vital part of the plant, just above the ground from which it grows and below half the height of the plant. In this case, the entire plant is exposed to a gradient of decreasing energy.
Treatment should be carried out at the early post-sowing and pre-sowing stages. A plant weight (mass of a substance) up to 25 grams is used in the calculations; Specific heat capacity 3000-3500 J / kg (specific heat capacity of water 4187 J / kg). Depending on the model, the number of magnetrons can be increased to 8.

Advantages of Using peroxide hydrogen dry mist:
- since H2O2 is very strong germicidal agent, it almost eliminates infection causing microorganism and in return provides better product in terms of volume, weight, size, strength, nutritious value, and taste.
- H2O2 is very environmentally friendly as it does not leave behind any harmful residues unlike other pesticides, fertilizers and additives used for growing crops as it decomposes back to H2O,Oxygen.
- use of H2O2 for diseases treatment ensures that plants grow more vigorously and are healthier, free form any kind of contagious diseases.

Significant part of the project is the AI-based computer vision and autonomous navigation that was tested in real environment and show good results.
Our methods and techniques are new to the market of innovative products, in terms of their importance for world agriculture, it can change the approaches to the implementation of the so-called digital agriculture.